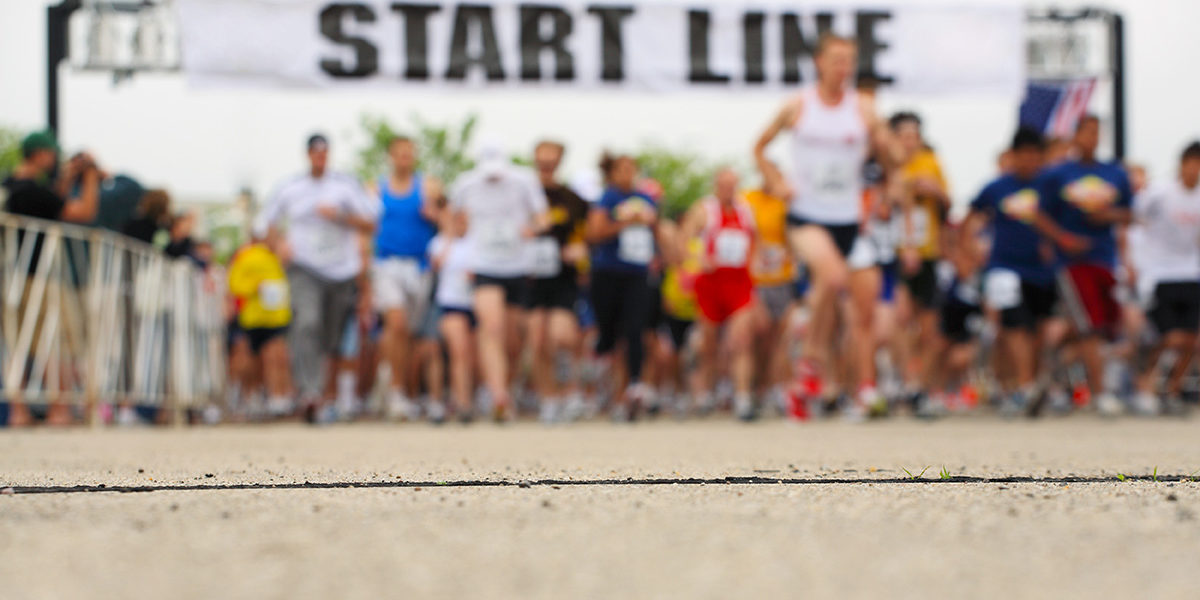 Running races have occurred around the world for millennia. From extreme competitions to kids racing each other in the schoolyard, you can find people testing their speed and endurance at every level.

Fun runs are a great intro to racing for anyone new to running. They’re also a good fit for people who run to stay healthy but don’t really enjoy running. Fun runs are produced with a theme in mind, and they encourage everyone to focus on fun more than running. Everyone from the runners to the volunteers to the bystanders has a good time at these races.

The distance for a fun run is usually around 5k, but they can be a little longer. Typically though, fun run distances are 5k or less.

Themes for the runs vary immensely. Most 5k runs benefit a charity (or multiple charities), so the run might have a related theme, or it might just be an off-the-wall theme. For example, New Orleans is known for its partying and its personality. Each year, two major fun runs are designed to have a good time and raise money for charity.

You can also find popular fun runs that travel from city to city to host their events. This includes glow runs, paint runs, zombie runs, and the Cupid’s Undie Run. With the increased popularity of virtual races, you can even find virtual fun runs to join your friends. Gather some buddies together, find a fun run that suits your style, and go check it out!

The intro distance for most legitimate races is 5k (3.1 miles). Though some fun runs will be 5k or shorter, most fun runs aren’t run with finishing times in mind. They’re run for fun. Though many 5k races are also produced with a theme of some sort and benefit a charity, there’s less frivolity.

5k races are great for new runners who want to do their first race. They’re also good for experienced runners who want to improve their pace or train for larger races. There are typically finishers’ awards for everyone who completes the race and overall awards for the fastest runners. Finishers’ awards are typically something like a medal or a t-shirt. Overall, awards vary from race to race but can include anything from trophies to cash to something unique for that race theme.

Since 5k races are one of the most popular distances, there are plenty of races to choose from. Most major cities and their suburbs will have multiple 5k races each year with various themes. Some are a little more serious (like the Battle of the Rattle 5k), and others are pretty given a unique theme (like the Twinkie Run). You can also find a plethora of virtual races to run on your own time to earn fun shirts or medals and support your favorite charities.

As the next level up from a 5k race, 10k races are a bit more serious. A 10k is 6.2 miles long, so it’s not ideal for brand new runners. These races are better for people who have been running for a little while and who already feel comfortable doing a 5k. Many experienced runners like to use a 10k to step up from a 5k as a way to train for a longer race or as a way to qualify for an exclusive race.

10k races are not as popular a distance, so there are fewer of them to be found. However, most major cities and their suburbs will have several 10k races every year. Most often, you’ll find a 10k option in conjunction with other options like 5k races, half-marathons, or marathons. Occasionally though, you’ll find a stand-alone 10k.

Some 10k races are fun, some are serious, and some are a combo. For example, the Cooper River Bridge Run is both a fun run and a serious competition. Thousands of people join in the race each year and even make it an annual tradition. Some people take it lightly by wearing costumes, walking the whole thing, and stopping at bars during the race. Others train for months in advance, compete in other races to get the best starting positions in this one, and vie for cash prizes and limited edition prizes.

Running a half-marathon (13.1 miles) is the first big step to running an endurance race. Half-marathons are not for novice runners. If you’re going to begin training for your first half-marathon, you should already be able to run about five miles without stopping. If you’re not at that point yet, keep building up your stamina.

Preparing for a half-marathon takes a bit more planning than preparing for a 5k or 10k. You’ll need more water and calories than you would for the smaller races or fun runs. The race producers will likely have water stations and aid stations along the route, so make sure you know where those will be. Knowing those distances ahead of time will help you plan your hydration and calorie intake appropriately.

You’ll find more avid runners at the half-marathon races, but there will likely be some newbies as well. Half-marathons attract runners who want to challenge themselves but who aren’t at the point of wanting a time-consuming endurance run. The maximum time limit on most half-marathons is around 3.5-4 hours.

Though half-marathons can be themed, they typically aren’t designed to be as “fun” as many 5k races. That being said, you can still find some pretty fun half-marathons if you look for them. They typically coincide with other distances (marathon, 10k, or 5k), and all of the distances are designed to be fun. For example, the Rock ‘n’ Roll Marathon Series has races of all distances in various locations worldwide. Their races have small bands playing along the run route, and they have a main headlining band playing at the race finish line.

A marathon (26.2 miles) is an endurance event meant for experienced runners. If you are a novice runner, don’t jump straight into a marathon. Running a marathon requires training and planning. Most people who run marathons really enjoy running or really enjoy challenging themselves physically.

The marathon distance is great for people who have already run a half-marathon and want to do something bigger: competitive runners, want to do competitive races, and people training for bigger races.

As with the half-marathon, review the run route and the details of the race in advance. Know the distances between water stations and determine if there will be aid stations with energy bars or gels available. If there won’t be food or gels along the route, consider bringing your own energy-boosting snacks.

While marathons are certainly a test for your determination and stamina, they can also be fun. Marathons are a pretty popular race distance so that you can find various options—most major cities worldwide host at least one or two marathons each year.

A lot of marathons are produced to be pretty basic without a lot of frills. Like the Disney World Marathon, others will keep your attention throughout the race and provide a truly unique run. Of course, there are also extremely competitive marathons. The Boston Marathon is one of the most prestigious running races globally, and you have to qualify beforehand just to be allowed to register for it.

If you would like to do a marathon, here are a few tips:

Though anything longer than a marathon is considered an ultra marathon, most ultramarathons are between 50k (31.1 Miles) and 100 miles. However, they can be longer. Ultra marathons are designed with the toughest runners in mind.

Because ultramarathon distances can vary so greatly, you have to be selective in which race you choose. A 50k race (31.1 miles) on flat terrain like Clearwater Running Festival will be much different than the Shadow of the Giants 50k in the mountains. Distance, terrain, and temperature are all major factors in choosing the right ultramarathon for you.

Ultramarathons require more planning than all of the other race types. Runners completing ultramarathons will be expected to carry more of their own water and food. The distances between aid stations or support will be greater than when non-ultramarathon races. Because the distances are so long, you will also need to factor in temperature changes throughout the day, the possibility of foul weather, and running in the dark. Prepping and training for an ultramarathon takes time, so plan accordingly.

You can find a trail race of almost any distance. The biggest difference between a trail race and a road race is the terrain. Trail races are often run on packed dirt trails, but the route could also include grass, sand, gravel, mud, rocks, or water. If you don’t like getting dirty, a trail race is not for you.

Trail races are great for people who prefer to run off-road and like the added challenge of trail running. Some races are designed to be challenging and competitive. Others are designed to be more unique. For example, the historic Dipsea Race in California features close to 700 stairs and several alternate routes on the trails, placing a premium on strategy, experience, and familiarity with the course.

Since trail race distances and locations vary so much, you should be able to find a race that suits your running level. Many trail races include water stops and aid stations, but some don’t. When choosing your race, double-check all of the race expectations and rules.

Obstacle races like Tough Mudder and Spartan Races have become very popular over the past decade. They combine a footrace with obstacles and feats of strength. Distance and the number of obstacles vary from race to race. You can typically find distances that range from a 5k to a marathon. Select the race that is appropriate for your fitness level.

Obstacle races are great for runners who get a little bored with standard races and for people who enjoy adding some extra workouts to their runs. Obstacle races tend to be very high-energy and exciting. They can be pretty competitive, but they’re also designed to be fun for anyone who likes sweat and mud.

Lots of runners get friends together and form a team to compete in obstacle races. Comradery is a big part of obstacle races. The obstacles typically include rope climbs, monkey bars, up-and-over walls, mud crawls, and more. If you don’t like getting dirty, obstacle races are definitely not for you!

Training for an obstacle race is a little more involved than training for a road race. You can still follow a road race training plan, but you need to include trail runs and extra cross-training. If you’re already a member at a CrossFit gym, your gym training will help prepare you for the race. If not, search online for some CrossFit style workouts that you can do at home.

What type of running races are you going to complete?

Once you choose the type of race you want to run, it’s time to start training for it! If you’re struggling with the motivation to train or are just not sure how to train for your race, you might benefit from following a structured running plan. Proper training will prepare you for the race both physically and mentally. If you want a successful race experience, make sure you get the most out of your training time.

Become a Sunrise+ member today to unlock access to all premium digital content, running plans, shop discounts, and more! Sign up for just $30.00 per year, here.